HRH The Princess Royal officially opened James Fisher Defence’s new premises at Inchinnan on 19 February 2014. Having been received by Mr Guy Clark, Lord-Lieutenant for Renfrewshire, Her Royal Highness met Mr Roger Chapman CBE, Chairman, who escorted her on an extensive tour of the premises during which she met Directors and senior managers amongst others, heard about the Company’s history and achievements and viewed various models, including of deep search and rescue vehicles. She also heard about James Fisher Submarine Rescue Services in Singapore and Australia and met representatives of the JFD’s Services Team responsible for delivering submarine escape and rescue services worldwide and its Special Operations Team.
Her Royal Highness also heard about a range of projects and developments during which members of the Design, Projects and Engineering Teams were amongst those presented to her. Employees with long service as well as some of those who had recently joined the Company were amongst those who were delighted to have the opportunity to be presented to Her Royal Highness.

Later that day, Her Royal Highness visited Bray Controls (UK) Ltd, Inchinnan, where Mr George Crooks the Managing Director for Europe based at its new facility there escorted her on a tour of the Headquarters building, during which she met many of those working in and involved with the Company, including Mr Frank Raymond and Mr Craig Brown, Chairman and President and CEO respectively of Bray International Inc. The Princess Royal heard about the Company’s history and family ethos as well as its products and recent expansion.Amongst those presented to Her Royal Highness were representatives of the Inside Sales Team and those involved in external sales, quality control, contract work, manufacturing, shipping and engineering. Mr Frank Johnston, Chief Design and Consultant Engineer, one of Bray’s eldest and longest serving employees and two apprentices reaching the end of their apprenticeship were amongst those honoured to be presented to Her Royal Highness during the visit. HRH also saw a manufacturing demonstration and how equipment, including a new Test Rig, operated.At the conclusion of her visit, The Princess Royal unveiled a plaque to mark the official opening of the new facility. 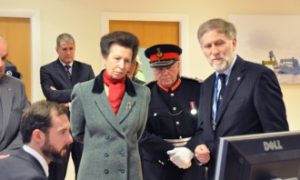 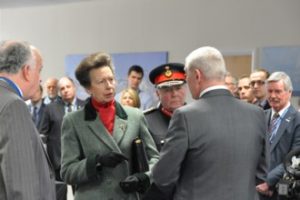 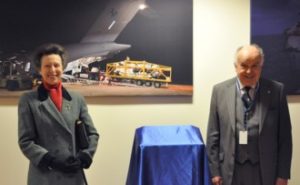 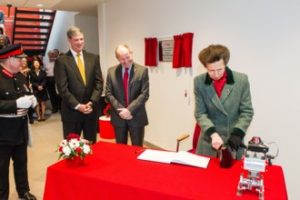 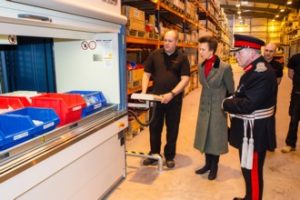 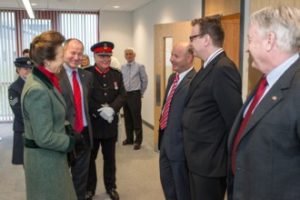