HRH The Earl of Wessex, in his role as Patron of Greenock Arts Guild, officially opened The Beacon Arts Centre on 16 August 2013. Following a Gala variety performance featuring music from Andrew Lloyd Weber productions and local, national and international artists, His Royal Highness unveiled a commemorative plaque on stage to mark the official opening and met many of those who had performed, including Scott Davies, Keith Jack and the award-winning Inverclyde Junior Choir.

The official opening of The Beacon, a project jointly funded by Greenock Arts Guild, Inverclyde Council, Creative Scotland’s National Lottery Awards and Riverside Inverclyde, marked the culmination of nine years work by a dedicated group of volunteers. During the evening, including at a Reception following the performance, His Royal Highness met a wide range of others who helped bring the project to fruition, including Mr Elliot McKelvie, Chairman of Greenock Arts Guild Ltd and other Directors of the Guild, the Chief Executive Officer and Artistic Director of The Beacon Arts Centre and representatives of major funding partners, donors and trusts. 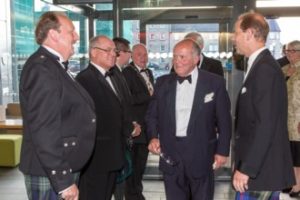