Visit by HRH The Princess Royal to Paisley Abbey and Texas Instruments, Greenock, on 15 October 2012

HRH The Princess Royal attended a service at Paisley Abbey on 15 October 2012 to mark the beginning of the Abbey’s 850th anniversary year. The Abbey was founded in 1163 when the High Steward of Scotland signed a charter establishing a ‘house of devotion’ in Paisley which became one of the foremost cluniac abbeys in Europe. After the Reformation it continued to serve as a place of worship for the people of Paisley and it is today a vibrant parish church of the Church of Scotland.

Following the service, which featured music especially composed for the occasion, HRH met members of the Abbey’s 850th Anniversary Organising Committee, Deputy Lieutenants and other local dignitaries. She also unveiled a plaque commemorating the visit and received a gift from 8-year old Stephen Chalk on behalf of the Abbey congregation. Members of the Abbey congregation and representatives from other churches and the community in Paisley attended the Service.

HRH The Princess Royal also visited Texas Instruments’ Scottish semiconductor fabrication plant and design centre in Greenock in the afternoon of 15 October 2012 during which she heard about the work and history of the company and the Greenock site and toured the facility. She met a wide range of employees, including members of the leadership team, manufacturing and maintenance technicians, designers, the healthy working lives team and key engineers. HRH also unveiled a plaque to commemorate the visit and made presentations to nine members of the Company’s Community Care Team in recognition of their work to support education and welfare in Greenock. 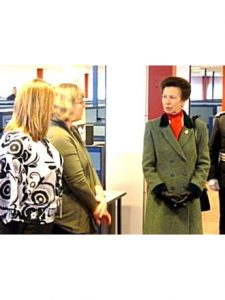 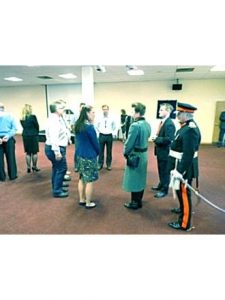