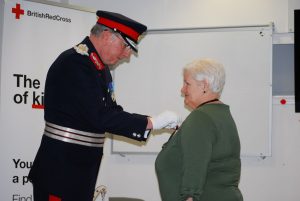 The Lord-Lieutenant presented a British Empire Medal at a ceremony in the British Red Cross Headquarters on 22 October 2019 to Mrs Ann Brogan BEM for voluntary  service in Renfrewshire. Ann has dedicated more than half of her life to helping people in crisis though her work as a volunteer with the British Red Cross. Over the years her personal intervention as a first aider has directly saved a number of lives, with many more lives helped through the hundreds of people that Ann has trained in first aid. As an emergency responder, Ann has been at the heart of providing practical and emotional support at numerous responses in and around Glasgow, including the Stockline Plastics explosion in 2004 and the Glasgow Airport attack in 2007. She has also been a key player in leading support at countless public events over the years where her compassion and relentless commitment to helping others have been ever to the fore. Ann is pictured after the ceremony with the Lord-Lieutenant and Councillor Lorraine Cameron, Provost of Renfrewshire.