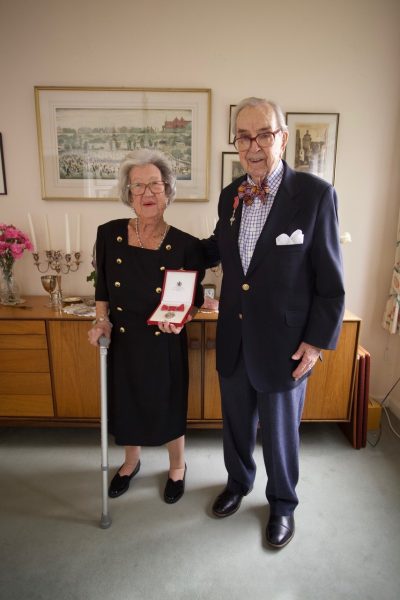 At a very special ceremony in their home in Giffnock on Mothering Sunday, 22 March 2020, a British Empire Medal was presented to Mrs Ingrid Wuga for her longstanding services to raising awareness of the Holocaust and education to many thousands of young people in Scotland. The medal was presented to Ingrid aged 95 by her husband Henry Wuga MBE in the presence of her immediate family and shared with all of her grandchildren and great grandchildren by videolink. Both Henry and Ingrid arrived separately in the UK from Germany on the Kinder Transport in 1939 and they subsequently met and were married at Pollokshields synagogue in 1944. Henry aged 96 was awarded the MBE in 1998 for his services with BLESMA to sport for disabled people. It is very much hoped to be able to have a civic reception to share this wonderful story with a wider audience in East Renfrewshire when circumstances allow.