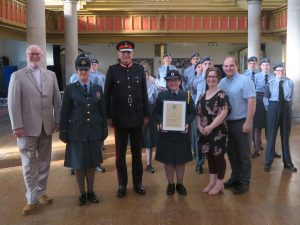 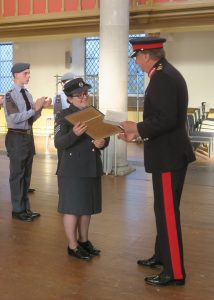 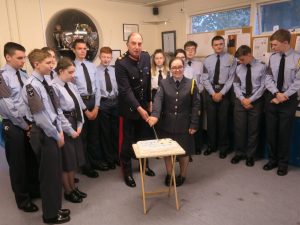 The Lord-Lieutenant and his wife Jean were given a warm welcome at the Greenock Air Cadet Squadron when he visited on the evening of Thursday 27 June. The evening began with a parade in the Lyle Kirk Union Street Building during which a certificate was presented to Cadet Flight Sergeant Abigail Cameron on her appointment as a Lord-Lieutenant’s Cadet.

A visit to the Detachment on Ardgowan Street then followed during which the Lord-Lieutenant met cadets, adult instructors and the wide variety of parents and other volunteers who provide unstinting support to the cadets. The evening concluded with the cutting of a cake in honour of the newly appointed Lord-Lieutenant and his new cadet!

Pictured along with the Lord-Lieutenant are Flight Lieutenant Vanda Nicholls, Officer Commanding the Greenock Detachment, the Reverend Alan Sorensen Chaplain to the Detachment and Cadet Flight Sergeant Abigail Cameron and her parents.